Most geeks, sort of by definition, are at least some part socially awkward penguins. Which means in a sense that many situations that a lot of people find perfectly normal we might find daunting and will therefore approach from our typical analytical viewpoint as to how we can undaunt the daunting or at least blunt it somewhat. When we establish the rules or conditions for these types of situations, it’s important that we share them with others so that we can all learn.

Which brings me to pooping at work.

Now let us establish, for the purposes of the discussion, that pooping is a very private act. The very posture of the body is a vulnerable pose. While often protected by some form of visual privacy, there is rarely any aural privacy. And as we all know, pooping is second only to sex for the body to make loud noises it doesn’t normally make. Sounds one might find interesting, even humorous in the lone privacy of the home pooping scenario quickly become fraught with anxiety and panic in more communal situations.

Now pooping at work isn’t terribly different from other shared bathroom scenarios, but it’s the one I have the most experience with having spent 18 years in a 9-5 corporate style job.  Further, I should note this discussion will be restricted to the male bathroom experience. Not unlike your purses ladies, your restroom is a complete mystery to us.  I picture tasteful wallpaper.  Perhaps some scented candles.  Pink or magenta colored stalls, and a nice loveseat and duvet in the corner just for sitting and chatting.

By contrast the typical corporate men’s room is a sterile environment. Black glossy countertops.  White tile walls. A typical two urinal and three stall configuration, where if the designer was feeling particularly saucy the stalls are taupe instead of grey.  The entire men’s restroom design feels like its creators firmly believed at some point it will be necessary to blast clean the entire place with a high pressure hose.

So you’re at work, and you have to poop.

There are several initial scenarios to consider upon entering the bathroom.  First and foremost is the best case scenario: Totally empty.  Two blank urinals and three open stall doors.  This is the prime condition for pooping at work. This is where you can let your poop flag fly.  Despite your desire to take the oversized handicap stall however (or as I refer to it: The Luxury Suite) one shouldn’t, as awkwardness reaches new levels when you exit the handicap stall and the only other person in the empty bathroom is someone who actually requires it.

Much like the Urinal Rules, the situation becomes more complex if one or more of the stalls are occupied.  REMEMBER IT IS OK TO ABORT. However if your level of awkwardness isn’t that high or your need is too great, where possible try not to take a stall next to someone.

Once in the stall, assuming a certain level of cleanliness, there are only ever two things you need to be sure about: Presence of an adequate amount of toilet paper (self explanatory), and the quality of the lock on the stall door.

I cannot impress enough how equal these two items are, a point I will return to shortly. Sometimes you are faced with a condition I call “Shoddy lock” where the latch or lock on the stall door is worn or broken, allowing you to close it but giving you no firm confidence it will hold under any duress.  If there’s no other available stall I repeat my guidance that it is ok to abort.  Otherwise you are playing a dangerous game my friend, a most dangerous game indeed.

All right, all things being equal you are in your stall and now ready to poop.  At this point the situation changes somewhat because no matter what happens from this moment until you are finished, you are severely constrained in your ability to deal with any adverse situations.  You are at your most vulnerable during the actual pooping.

A side note about styles of pooping: We’re not going to dive into mechanics here, but one protip to share is that sometimes we can’t always be in control of when the business end of the pooping business is going to have a loud and forceful argument with the toilet bowl. Where possible it is useful to try and time those expellatory episodes with the flushing of other stall toilets or urinals to minimize auditory crosstalk and the subsequent embarrassment.  Your only other recourse if you cannot do that is simply not leave the stall until everyone who was in the restroom during your situation has left and been gone for at least five minutes.

So!  Now you’re pooping. It’s here that you may encounter several denizens of the male bathroom, I have classified them accordingly:

A normal person entering a bathroom and encountering one or more closed stall doors will assume those stalls are occupied. Even if one assumed the doors were somehow stuck and the stalls empty, normal behavior would have them stoop low enough to look for the presence of feet.

Not the Juggernaut!  The Juggernaut barrels into the bathroom, selects one of the closed doors and rams it with his shoulder. The Juggernaut will typically do this not once, but twice. This forces you to shoot your legs out straight from the toilet to brace the door. The stress of the situation will cause you to call out in your least outraged and indignant voice “Occupied!”

Assuming the Juggernaut did not hear your mouse-squeak, they will eventually conclude the stall is occupied and move on.

The Beholder is much more courteous than the Juggernaut but subtly more terrifying. Most restroom stalls have a gap between the door and its frame.  While the Beholder won’t test the door, they instead will hover at the gap and peer through one eye into the stall to see if it is occupied, which always looks like this to me when I, in mid poop, look up and see their eye floating in the gap of the door: 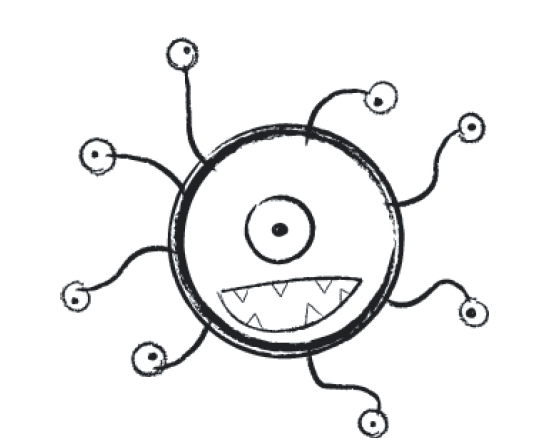 One trademark of the Beholder is the abnormally long time it takes them to discern that yes, the shocked and fearful looking person on the toilet does in fact mean the stall is occupied.

The Shadow is the most disconcerting member of the menagerie.  You clearly hear someone enter the restroom. You can even hear them approach the stalls and not the urinals.  You know the other stalls are occupied.  Then you hear…nothing.  The Shadow makes no noise.  And yet they are there.  Who are they?  How badly do they have to go?  Are they waiting patiently or impatiently?  Oh god, are they thinking I’m taking too long?  How long have I been in here?

The Shadow compounds your anxiety with their very silence.  Until you finish and rush out of the stall, being sure not to make eye contact as you mumble your apologies for taking so long.

Most of these scenarios are fairly benign, and I think by sharing this with you we become more comfortable and knowledgeable. The only real problems occur when some of the scenarios and denizens combine.

The cure for constipation by the way, no matter how bad it is, is the combination of shoddy lock and The Juggernaut.

Listen to my comedy album!

Or listen to my book!